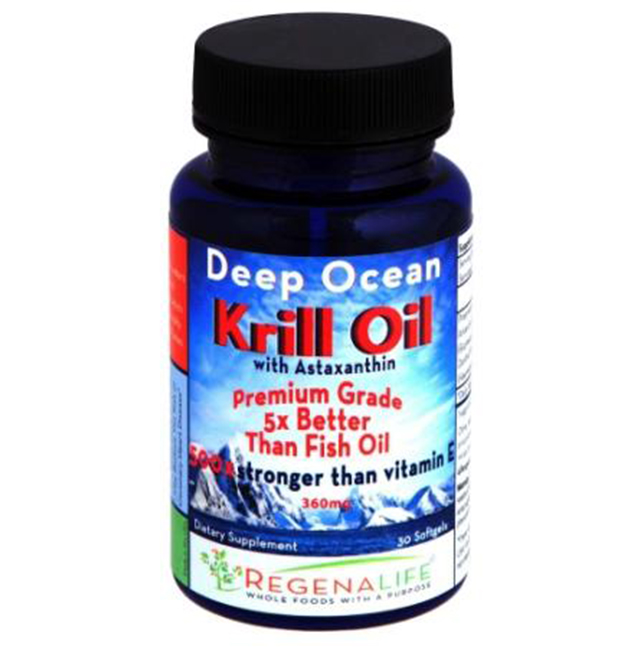 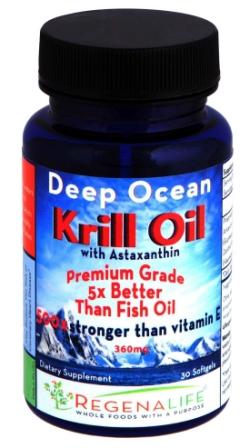 RegenaLife's Deep Ocean Krill Oil is harvested from THE WORLD'S CLEANEST & PUREST WATERS. Our krill oil is independently tested to ensure it's free from harmful contaminants.

RegenaLife's Deep Ocean Krill Oil is harvested from THE WORLD'S CLEANEST & PUREST WATERS. Our krill oil is independently tested to ensure it's free from harmful contaminants.

Why Krill Oil is Better Than Fish Oil

Antarctic krill is rich in the antioxidant astaxanthin, which gives the oil its characteristic red color. Astaxanthin is a natural carotenoid-type of antioxidant that is even more powerful than beta-carotene, alpha-tocopherol, lycopene and lutein. Astaxanthin naturally quenches free radicals, keeping the product fresh. Thus, no additives are necessary to maintain krill's long-term stability. By comparison, antioxidants are added to most dietary supplement fish oils to prevent them from going rancid during production or on the shelf.

Other Benefits of Krill Oil with Astaxanthin

Our krill oil is derived from the most sustainable source on the market. Krill are the largest biomass on earth. Yearly harvests are a mere few percent per year, meaning that production can continue sustainably for centuries. The harvesting of krill for the RegenaLife label is regulated by various organizations, such as World Wildlife Fund Norway. In addition, eco-harvesting effectively prevents the accidental bi-catch of birds, fish and other marine mammals. Krill harvested via traditional methods undergoes rapid decomposition.

If you are allergic to shellfish, have a blood coagulation disorder, or are taking anti-coagulants, do not supplement with krill oil. Also, do not store krill oil in the refrigerator, which can reduce its effectiveness by breaking down the phospholipids over time.